We're proud to continue the rich history of the Firefighters 5 Road Race.

Previous year’s results, records and course information can be found below. 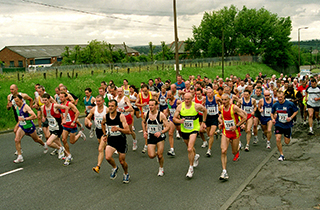 That’s all there is to the West Yorkshire 5…

Nearly 40 years later it sounds just as easy, however, as many have found out the hills don’t get any smaller and the bits in between don’t get any longer. Since the first race the course has changed a little, for a good number of years we started on Whitehall Road by the motorway bridge so as to make it a full 5 miles and in later years we moved the start back into the Headquarters site. The race isn’t going to help break any PB’s as its got lots of climbing involved, the first hill is nice and gentle and lasts one and a quarter miles from the start. Then you get nearly two miles of downhill, with the final sting in the tail going upwards all the way to the finish with the exception of the last 300 metres.

That simple 5 mile race was borne of several major events that occurred within the Fire Service during 1974. Firstly the demise of the County Borough Fire Brigades and the creation of the West Yorkshire Fire Service. This coincided with the move to Headquarters by David Edward Atkinson as a Staff Officer, thus bringing about the meeting of himself and a certain Charles David Turpin.

Charlie and Dave had remembered the days of the West Riding Road Race (6 miles) that had some years earlier, been a popular event. The race had been abandoned some years previous due to a minor hiccup called the M62. However, during Dave’s lunch-time training sessions he quickly realised that with a little imagination a 5 mile course could be created that didn’t involve crossing any roads, so a tentative approach was made to the then Chief Fire Officer Kevin Horan, who took the idea with great enthusiasm that has lasted the many years since.

In the early days there was a great effort to make the event a little different by ensuring that all the finishers were awarded a certificate with their time on it. It was also arranged to have every mile marked (Something we expect nowadays, but not back then!). Accommodation was to be provided for teams wishing to stay overnight at FSHQ and all results were published on the day of the race (Again a rarity at the time).

On occasions entertainment was arranged for teams that stayed overnight. On one occasion a visit to a Working Men’s Club was arranged as a team from down south, had never seen one. On being asked what was the traditional dress to wear in Working Men’s Clubs. It was replied that the wearing of flat caps and mufflers was compulsory. They duly arrived kitted out with flat caps and scarves of all descriptions and insisted on wearing them at the local club. Needless to say the locals were well informed of their guest’s arrival and fun ensued…

The teams that featured prominently in the early years were London, West Yorkshire, Merseyside, Lancashire, Tyne & Wear and although the rivalry was intense, friendships made at that time still endure. There is still the odd face or two around that remember it way back when.

One of the previous winners went on to international level, Geoff Smith of Liverpool, won the Boston Marathon twice (1984 & 85) and was 2nd in the New York City Marathon in 1983 in a time of 2:09:08, losing by only nine seconds.

For a lot of years the race was only open to Fire Service personnel, but in the late 80’s the race was opened up to anyone and everyone. In the early days the 5 miles was a good guess at five miles, but the times ran suggest it may have been a little short. In the late 80’s the course was unofficially measured and made very close. In 2002 the course was officially measured and found to be about 40m short of the official 5 miles so the start and finish were moved a few meters to compensate.

The 2008 race was the 33rd time the race had been run and unfortunately was going to be the last for a number of years.

The race made a triumphant return to the race calendar in 2013 and grew larger in 2014, the 35th time the race has been hosted.

In 2018 the race once again established itself as a favourite of the local clubs, with many perennial returnees.  The course was changed very slightly in this year, due to the sale of some land around the Fire Service HQ and the new course re-measured and certified as 5 miles by Course Certificate 18/362, with full details being available here.

There are various course records due to the distances over the years. These are the best times achieved looking back over the race results available (28 out of the 35 races):

The fastest time ever (Unverified course)

The course is best described as hilly with approximately 2.5 miles going upwards, approximately 2 miles downwards and a very little bit is level (Don’t blink you may miss it).

There will be marshals at each change in direction point, please obey their commands.

The course is also marked with plenty of signs and arrows, as well as mile markers. There will be a drinks station at approximately 3½ miles.

There will be a lead vehicle as well as a sweep vehicle.

Please keep to the left at all times and stay on the footpath when possible. On Hunsworth Lane the footpath stops and starts, so at times you will have to run on the road (Please be careful).

There will be a race briefing at the race start at 10:25.

Please bear in mind that we are guests on the roads and cars may not expect to see a couple of hundred runners running down the road.

Start at the edge of the drill ground and head past the finish line towards the Bradford Road entrance.

Turn left up the main drive.

Turn left into the small car park and run down the link road into the main car park.

At the bottom of the main car park turn left and pass the start and finish line.

Complete a 2nd loop the same as the first.

At the bottom of the main car park for the 2nd time, turn right and head towards the exit on Whitehall Road.

Turn left on to Whitehall Road.

Turn left at the roundabout on to Bradford Road and continue up past the West Yorkshire Fire Service HQ entrance towards Birkenshaw.

Continue up Bradford Rd for approximately 1¼ miles and turn left at the East Bierley sign onto South View Road.

Follow this road for approximately 400m then turn left onto Hunsworth Lane.

Follow Hunsworth Lane all the way to the end (approx. 1.5 miles) and turn left at the traffic lights onto Whitehall Road.

Follow Whitehall Road all the way up the hill; go straight over the mini roundabout and pass the entrance to WYFRS and on to the second roundabout.

Turn left at the roundabout on to Bradford Road (you’ve already run this little bit).

Take the next left into the West Yorkshire Fire Service HQ.

Once inside the HQ turn left and to the finish line on the drill ground.